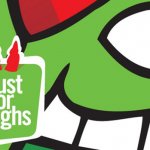 British comedian/honorary Canadian James Mullinger will hit the road in 2019! Is James Mullinger in witness protection? Well, he left a glittering life as a comedian and comedy editor at GQ magazine in London to move to New Brunswick. Find out why in his brand new show, Almost Canadian.The only show in Montreal will take place at Theatre Sainte-Catherine on Wednesday April 24 at 7:30pm. Mullinger will bring his unique brand of energetic, lively storytelling comedy, with a British flare, back to his favourite city after a three-year absence. Tickets are on sale now here or on theatresaintecatherine.com.

Since moving to the Maritimes from London five years ago, he’s done it all: sold out shows across the country, appearances on CBC’s The Debaters, movies, TV shows, festivals, awards, magazines, stand up specials and notably an eight show run at the Montreal Fringe Festival.

To say James has taken Canada by storm is an understatement. In April 2016, James sold out New Brunswick’s biggest indoor venue Harbour Station with his uniquely hilarious stand up show. This record breaking show was documented for a CBC documentary film ‘City On Fire’ which has aired across Canada to rave reviews and high ratings. The stand up special of the show itself was picked up by Hulu and Amazon Prime so his tales of life in Atlantic Canada are now being enjoyed by (or confusing!) people in Germany, Japan and America. (Read more about it) And in April this year he broke his own record selling out Harbour Station Arena yet again! This made headlines in the UK.

Watch the trailer to his special here.

Since then James has toured extensively to packed houses across Canada and England and written and produced a big screen feature film starring actors from Downton Abbey, Coronation Street and Twilight about his early years in stand up, which was described as “unmissable” by GQ Magazine.

James is one of Canada’s biggest cheerleaders. He loves it here and spends his time promoting it across the world and raising money for charities and non-profits. James has raised more than $100,000 for Canadian charities. Beyond fundraising, he shares his love of Canadian small towns and cities through his own international magazine The Maritime Edit.

But he’s putting movies and TV shows aside to go out and do what he loves most. Live stand-up comedy.
“I have become a fan of James Mullinger.”
– comedian Amy Schumer

“Something of a sensation. Expect the anecdotes to come thick, fast and raucously funny.”
– Evening Standard (UK)

Dawson Theatre Collective presents: The Importance of Being Verity