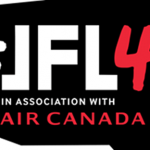 No, I mean maybe, but nothing comes to mind off the top of my head. I need some candy.

He reaches into the bowl of nutrition prepared for the comedians and unwraps a Starburst.
But no, I don’t think there’s any question I don’t want to be asked

I’m sitting with the very funny on stage and very cool in person, Mark Little after killing it tonight.

Okay great, I actually didn’t know who you were until this week. I realize now that you’re kind of a big deal. I was having lunch with my friend, and when I mentioned I was working this festival they told me that I (and I can quote this) Must. See. Mark. Little.
That’s incredibly sweet.

An hour later, I watch Mr. D for the first time, where you play the science teacher. That night, I get my schedule and you’re on it, so… this is fate.

It’s fate. Fate brought us to this interview.

First off, you look very young, but I don’t think you’re very young?

No I’m twenty-nine.
So you’ve been in the Canadian comedy game for…?

I did improv in high school, that’s how I started. I’ve been actually getting paid to do comedy in any capacity starting like six years ago, when Picnicface started—which is my sketch troupe. We started doing sketches and we were still doing a bit of improv, and that’s around the time I got into stand-up. All in Halifax.

Now that we know how and when, which people like to know, I’d like to know why? Why comedy?

Well, have you ever done comedy? Have you tried it?

I’ve dipped my feet in the water.

Did you have success doing it?

Still the first couple months doing stand-up.
Do you like it?
I love it.
Well then I’m sure you’ve felt that thing, the first time you make a room full of people laugh at you. I mean, it feels shitty to reduce to it to drugs that your body releases when strangers laugh, but it is. There’s that adrenaline rush, and there’s whatever else that’s being released into your brain that’s just like… the best. That feeling of making people laugh is, it’s crazy and amazing and it’s very easy to get addicted to. You want to work in that field, to do that for a living, and to have that experience frequently.
That was definitely the original impulse getting into improv in high-school. Especially being a high-school student who’s not a confident person and has trouble interacting with people, to suddenly being able to impress a room of people. Man, it’s like, “Oh okay, this is my ticket out of my skull. It’s my way of broader communication or broader approval,” or something like that.
And I think the more you do comedy, the more you fall in love with the craft of it. You want to do things that have never been done, or express yourself in ways that nobody’s ever heard anyone… you want to push for that uniqueness. It’s a combination of all that stuff; it’s why I do it.
So is there an endgame? Do you have that in your mind, can you see it? Do you know what that looks like? Or just… keep doing what you’re doing, and seeing where that takes you.
I guess my plan is to keep doing what I’m doing and seeing where it takes me. I don’t have an idealized thing that I want to achieve, but I see people who have things that I want. I think most comics look at Louis CK as like a pretty good emblem of how to be in comedy. To reach a level where you can make your own show and its totally on your own terms and its totally unique and you don’t have to worry about broadening your appeal in order to reach an audience to maintain ratings. You’ve reached a level where you audience comes to you—that’s nuts, that would be incredible.
Somebody like that, I look at him and I think… that’s everything. And comics of every level, to people like me who am relatively new to it, to Patton Oswalt. We look at Louie and his television career and, it’s the beyond all. There are other emblems but they’re not coming to mind.
Well, my next question was going to be: Did you have any comedic influences, inspirations or heroes growing up? And if those have changed since you’ve started performing.

When I was a kid, Eddie Murphy, I loved Delirious. A bit of Jerry Seinfeld too. Most of my comedy though didn’t come from standup, it came from the Simpsons and In Living Color, I liked a lot of black comedy when I was younger. When I actually got into standup, it was Dave Chappelle and Mitch Hedburg. Now, its still Hedburg, but the guys I actively worship are Dave Chappelle and Paul F. Tompkins, who’s probably my favorite comedian of all time.

Have you heard Paul F. Tompkins?

I haven’t but you make me want to.
What your friend said about me—which was very generous—what they should have been saying is “Go see Paul F. Tompkins” I think he’s just magical. Watch the peanut brittle bit, it’s a good introductory piece.
We’ll be sharing a postal code eventually with Louie and Patton, are you looking forward to a chance to meet them?
No I don’t think I’d go out of my way to. I don’t think I’d get anything out of shaking their hand and saying “Hi” except maybe I’d feel embarrassed and weird. Maybe if I reach a level where I can share a stage with them and then talk about comedy. They’ll be in their twilight years by that time though.
I wouldn’t say that, I was very impressed with what I saw tonight.
Well I appreciate that but those guys live in comedy meccas where they probably see hundreds of guys like me every day. I mean not only are they amazing comedians, but I’d imagine they’re tired of kicking around. They’ve got their friends. I didn’t mean to get self-deprecating there, sorry.
No it’s good, it’s honest. So how much of Canada have you actually performed for?
I haven’t really done a cross country tour. I’m from a suburb of Vancouver, and then I lived in Halifax for six years and then now I live here in Toronto. I’ve done little things in Edmonton and Winnipeg but it doesn’t feel as though I’ve performed across Canada.
I ask comedians who come here from the states if they notice a difference in Canadian audiences. Do you find there’s a difference province to province?
Obviously I don’t have nearly as large of a sample size as those guys, but I don’t find it differs. It’s less province to province and more rural to city. Once you’re in a smaller town, you can feel that change. For comics like me it’s easier in the city because I was raised in the city. I look at the audience and the people see things the same way I do and they have the same reference points and they grew up with the same stuff. That’s really comfortable. In a small town, it’s possible that we can share a lot of things, but it’s more possible that we share very little. There’s less of a diving in, for me, and more of feeling your way through it. Like, what are you guys into? How much should I keep in my weird skull and how much I should I keep it general?

But I bet Louie CK can go anywhere and tell his jokes and people will just ahhhhh.