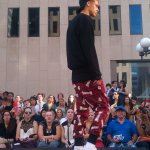 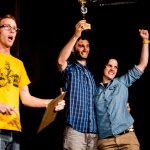 Hey folks! It’s good to be back reporting in English. I was having major brain cramps given that I don’t write in “La Langue de Molière” as often anymore and reminded of the countless and tedious French grammar rules I learned for over a decade, only to almost completely forget about them with a snap of the fingers. Anyways, today was the last day of the Festival Mode et Design de Montreal. As I was walking towards McGill College, ready with my water bottle, umbrella and notepad, I had a tad bit too much on me, but they were all necessities. I wanted to savour this last day as a VIP media member, so I found my spot, leaning on the wooden railing, and awaited for the next catwalk.

At six o’clock, “Everyday Sunday” started off the evening on the main stage, blasting Robin Thicke’s ever so catchy “Blurred Lines”. Models were seen in the latest beachwear, which was a nice break from all the fall/winter clothing we’ve been seeing in many of the collections thus far. Bikinis and tankinis were seen in bright pinks and other simple colours. Pairing simple bikinis tops with a more elaborate and fun bottoms was also popular fashion choice.

Everyday Sunday was followed by “Wordans- De La Mode a Vous”, whose main motto was “You Think It, We Print It”…which is literally what they did, as most of their apparel had something imprinted on their clothing. I felt like their clothing was a cross between very simple and casual to somewhat eclectic, as one model was sporting a simple white dress with a huge parrot on the front (you thinking of a parrot? well, they’ll print a parrot apparently). I liked their opening, as the second trio of models were decked out in nautical, pirate wear. Franco Negretti was the last catwalk before what I like to think is the transition to the night portion of la soirée. Although it wasn’t as revealing as Yves Martins collection (to the great dismay of many female spectators), we got to see some funky colourful prints, pastels and checkered dress shirts. Their sexy-serious looks were enough to put smiles on the face of many women in the crowd anyways. After taking a quick shawarma break at the next door Basha, I came back to Le Chateau’s catwalk. Their fall wear followed much of the latest trends, as leathers, plaid, stripes and rich warm colours were evident. They mixed and matched different colours and textures, such as matching a magenta blazer with leopard gloves and leather pants, which I think set them apart from other stores. Guess followed soon after, showcasing similar clothing, although topped off with fur hats and scarves. Slowly but surely however, it started to rain, which didn’t stop the models from strutting in high-heels and keeping their focus. However, once the models retreated, an announcement was made, officializing the postponement of all further catwalks…which resulted in what felt like a really long time of standing, waiting, and watching the rain pour…and pour some more. I knew that umbrella would come in handy! Finally, after clearing the wooden boarded catwalk several times of the water, the show finally resumed with Marciano, which impressed me quite a bit. I have a huge soft spot for anything see through, because I find it adds an element of surprise and mystery. So, it comes to no surprise that my favourite item of clothing was a long see through blouse. I also really like how they weren’t afraid to play with sequins, bright colours and lace. I guess it was worth waiting for!

La Maison Simons soon followed. Now, for my friend and myself, this catwalk was a little more special to us since we both work there! I was able to recognize most of the clothing and actually mentally locate them in the store…which brings me to this conclusion: I spend way too much time at work. Apart from being in denial, I was really impressed by the collection they put together. I saw a lot of dark plaids, paired with sleeveless jean jackets, which contributed to interesting texturing. On top of it all, “Howlin’ For you” by The Black Keys played midway through the catwalk; Let’s just say that I was a very happy employee. Keeping up with the latest trends, I also saw a lot of cross designs, leather and leopard prints. For their first time at this festival, Simons did a great job! After announcing the winner for the “Become a Model for Clin D’Oeil” contest, the crowd was treated to the last show of the night, “Mutations” by Genevieve Borne. It was probably the most outlandish fashion experience I’ve witnessed in a very long time. But I loved every bit of it. We were introduced into a world without much “human” left in it, where models were being fashioned by their creators. The crowd was able to see Pedram Karimi’s collection that was showcased earlier on in the day, and Borne brought back the 80s with the glorious fluorescent orange mullets and lightning bolt à la David Bowie, dressed in funky, sequins and shiny clothing , only to bring us back to a Grace Jones inspired set, where the models balanced an hot red geometrically shaped head piece while dawning black or white oversized structured sleeveless smocks.The next part showed models walking in with a metal shield on the front and back of their heads, rocking out on stage with their leather studded jackets. As Borne’s face morphed on the two screens between each set, so did the fashion, where the only constant being this space-like, robotic, futuristic feel. Watching models walk in a broken procession as they relied on the crutches for their every step is something no one would be used to seeing on a catwalk.  Nor is rolling in a model covered ina a white sheet, only to be brought to life a little while later and seducing the born-again Micheal Jackson. Following order to report to the dance floor, models hiding at the bottom of the stage hopped on and busted a move, each expressing their own individuality…which is what fashion is all about, right? Mutations by Genevieve Borne: When would you normally see this on the runway?

This was my first time covering the Festival Mode et Design de Montreal. It was truly an incredible experience and I want to give a huge shout-out to the models who walked in those high-inch heels on a very damp wooden floor…you definitely gotta be good to do that! Thanks for tuning in folks, I’ll be writing to you in the very near future.

T.J. Miller at Talk of the Fest 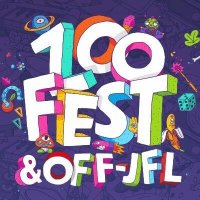